Southern Way Gourmet Company was founded in a small Georgia town in 1996 by Craig Nelson and Paul Gibbs. Two true southern gentlemen; one who loved to cook and the other who loved to eat. Their wives and children joined in at many cookouts trying to perfect the best taste for the sauce which would later become “Southern Secret Sauce”.

So, in 1996 Southern Secret Sauce an old family recipe was developed by these same two men. The sauce has natural meat tenderizers allowing the flavor and spices to cook through the meat not just on the surface. It gives chicken, ribs, and other meats a unique spicy flavor. Once you discover how tender and juicy meats can be, you will never try another sauce. Part of the secret is basting every 3 -5 minutes allowing the meat to absorb all the natural flavors and spices.

“The more you baste the better it taste!”
Craig Nelson passed away in August of 2005. He and Paul had great vision for Southern Way Gourmet Company. In 2006 “James Do All Shake or Rub seasoning” hit the market. Craig had a dream to create the perfect seasoning for “ALL” meats. Paul and James worked by his side in perfecting and developing the final formula. He named it “JAMES’S DO ALL” shake or rub seasoning for his son.
JAMES’S DO ALL is an extraordinary blend of spices that will “be all” the season needed for meat, poultry, seafood, vegetables, salads and many other foods. JAMES Invites you to “DO ALL” your cooking and grilling with this amazing seasoning. 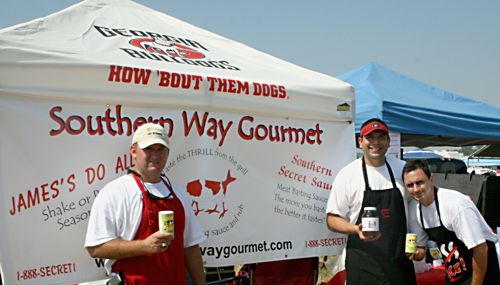